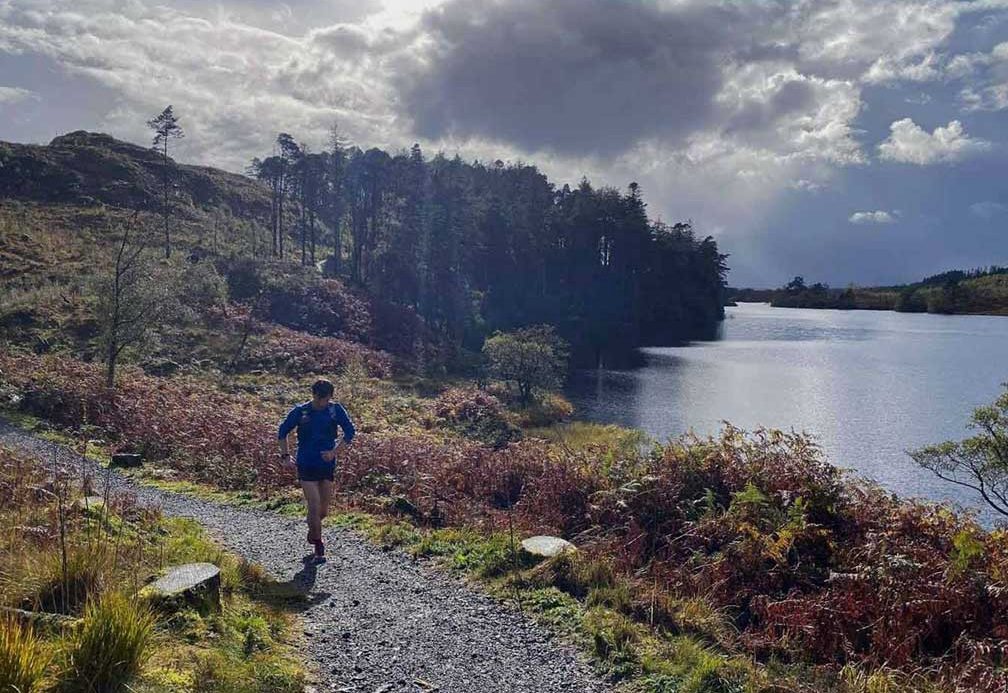 The 26 year old from Stone in Staffordshire beat Mike Hartley’s record of 55 hours and 55 minutes that has stood since 1988. As if this triumphant time wasn’t enough, he also raised more than £1,800 for Trees Not Tees via a GoFoundMe Page that he had set up as a way to thank his support team. We caught up with Jack post-victory to find out more about his strenuous journey, plus why he’s taking action to combat climate change.

Many congratulations on breaking Mike Hartley’s 32 year-old Southern Upland Way record! Tell us about that.

Yes, it was some weekend I can assure you, an incredible experience for me. When I first looked at the route and the long-standing record time, I knew It would be right on the edge of what I’m currently capable of. Mike was an exceptional runner, and it was brilliant to communicate with him before the attempt to really gauge what it would take and get his side of the story. I’ve run far and long before and had some good results, but like I said, this one really took me out of my comfort zone.

The run was going to plan, despite some difficult weather, up until Saturday evening when the clock started to go against me. A tough night with hallucinations and some severe pain in my left leg had set me back around 90 minutes. Leaving the last major support point I had 8.5 hours to cover around 33 miles- which is around 4 mph. When my support runner explained this to me at the time, I had accepted that it might be too much to ask, but I got out the support van and started to move. Something changed and I found the pace I needed. I felt in control, it was extremely hard on my body, obviously, but the adrenaline was there.

With 3 miles to go I was 15 minutes up on time, I remember looking left and catching the eyes of Glen, my road support. We both nodded and had tears in our eyes. I knew then I had it, it was over whelming and the raw emotion these challenges make you feel and create are a huge part of why I undertake them. You must really let things go and strip it back to basics. A fantastic feeling to finish, an honour. The route is spectacular and beautiful.

For an ultra-runner, you’re pretty young!! What’s your running background?

Yes, I guess I am. I’m 26 and have been running just over 3 years. I used to play football in my younger years but nothing running specific. I was working away in Wales, running in the hills every evening and I guess that’s where it started. I soon made the transition to the long hard stuff. I’m certainly the sort of person who will jump in headfirst and see if he can swim. It’s got me into trouble in the past but when I transfer this attitude to running, it is working for me.

Thank you so much for fundraising for Trees not Tees on your run! Can you tell us about why you chose to do that?

I’d heard of the brilliant work Trees Not Tees were doing along with The Future Forest Company and I knew that ultra-runner Jim Mann was at the for front of it all. So, I was interested. I’ve admired Jim for many years and watched him demolish some incredible races and routes all over Britain. It was John Kelly who really got the ball rolling when he planted a tree on my behalf after assisting him at the start of his Grand Round attempt in Snowdonia.

I had the Southern Upland Way pretty much organised by then and I got in touch with Trees Not Tees because I wanted to emulated John Kelly and plant a tree for those who would be assisting me.

When you told me the price per tree, I was astonished! I thought that I could open it up to the public and use the record attempt as a way to promote just how easily and cheaply we can all start to make steps in the right direction and have a positive impact.

The Southern Upland Way runs through some truly astonishing landscapes, in the West the Galloway Forest Park is vast and the forests are breathtaking, it felt right to add to that and get some trees in the ground.

How concerned are you about the climate crisis, have your concerns impacted your lifestyle?

Yes, I’m concerned, we should all be. There are problems close to home which need addressing, as well as the global issues. Part of the reasoning behind opening up the donation page to the public is to show just how easily we can start making the right steps. People want to help, but the options available need to be more convenient. Like advertising a tree can be planted for the price of a coffee. That’s the sort of scheme which can really get the ball rolling for people and open up to bigger more influential projects. We can all do more and be better, be more considerate and disciplined.

You don’t have to be a member of a group or extreme movement to want to improve the environment. I think if we all focused on our own mini projects, like walking into town, instead of driving.

Lift-sharing or moving more efficiently to work. These are realistic changes which can be made today and will, eventually make a big difference.

Who inspires you to keep running?

I love the variety running brings. I enjoy doing laps of a track, as fast as I can on a Friday evening, then on the Saturday I could be in Snowdonia doing hill reps or going over Crib Goch. There is no end of possibilities. So, I’d say the different routes and challenges, the landscapes and pushing for times is what inspires me. I’ve dedicated everything to running, because when I started, I soon realised that it promotes the best version of me. When I’m training, planning and plotting things. Every decision I make now is somehow based around running and that lifestyle. You don’t have to be pushing for record times or running ridiculous mileage, but if you let running in, let it influence your life, I can guarantee you will feel more positive and fit whilst becoming a better person.

What’s next for you, running wise?

A nice steady autumn and winter now, I usually go to Snowdonia a lot over Christmas and new year to run and hike, nothing serious but just to spend time up there with no pressure or push to be doing certain things. Enjoying the landscapes and having time on my hands before I plan for the start of next year and spring. Extremely strange times we’re living in aren’t they? just thankful I’ve managed to achieve what I have this year. My family are healthy and happy, time for running to take a back seat for a while.